Inside the Consult Room: Is there a torn ACL or not? 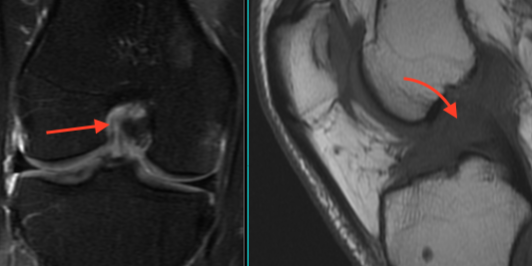 Note: In this series, I will discuss the direct patient-to-radiologist consult experience from real patients seen at Lightbulb Radiology. The names (and some details of the clinical history) have been changed for purposes of anonymity. All of these cases are presented with the patient’s permission. For more information on how to obtain a consult, click here.

Case history: Charlotte is a 34 year-old wife and mother of three who injured her right knee while ballroom dancing. She had acute onset of pain followed by swelling, decreased range of motion, and difficulty walking. Charlotte presented to her primary care physician who after a history and physical referred her to an orthopedic surgeon with concern for a torn ACL (anterior cruciate ligament), meniscus tear, or other internal derangement. On physical exam, Charlotte had a positive anterior drawer test, compatible with a torn ACL.

Charlotte underwent an MRI of the right knee and on follow-up with the orthopedic surgeon was told she had a torn ACL, and surgery was recommended. The official report from the radiologist, however, indicated that the ACL was not torn.

Reason for consult: Charlotte felt fairly confident that the orthopedist was correct in his diagnosis of an ACL tear. But the discord between the orthopedist and radiologist was certainly causing some angst. She felt herself troubled by the possibility of “going under the knife” to reconstruct a ligament that was not torn in the first place. Why was it read as being intact? Could it be a partially torn ACL?

Imaging review: The imaging demonstrates a complete tear of the ACL. The normal ACL extends obliquely through the joint from the inner aspect of the lateral femoral condyle to the medial tibial plateau. In Charlotte’s knee, the ACL has been completely torn so that none of the fibers bridge all the way from the femur to the tibia.

The consult: The first point I emphasized with Charlotte was that the ACL was in fact completely torn. This was her principal question going in and I wanted to clearly articulate this point.

I was also able to use the consult time to give Charlotte a better sense of her injury. The bony contusions were in a kissing pattern characteristic of transient movement of the tibia relative to the femur as the result of the torn ACL. The small joint effusion was also expected. The absence of other serious internal derangement certainly increased her chance for a full recovery with surgery.

Why was the ACL read out as intact? I of course don’t know the answer in this exact case, but the truth is that all radiologists miss things from time to time for various reasons. Physicians are not perfect. That same radiologist may have made an amazing call on the same day that resulted in the early diagnosis of a cancer that had not yet metastasized. Or that same radiologist may have made a call on a shoulder CT that that same orthopedic surgeon had overlooked.

For Charlotte, it was great for her to hear another physician confirm her orthopedic surgeon’s diagnosis. This gave her the reassurance to go forward with surgery without any doubt. At the time of writing, Charlotte has had a successful surgery and rehab period, and is back running around doing all the tasks of being a Mom (ie. everything).

This is the second in a series. See the first part: a 19 year old with a spinal compression fracture.

Rourke Stay, MD is a radiologist and the Founder of Lightbulb Radiology.

Go to the Head of the Class: 5 Hints to Getting the Most Out of Your Radiology Result
December 21, 2014