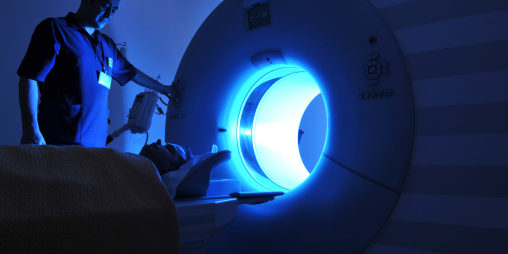 From seeing elegant pictures of our brain and spine, to definitely characterizing masses in the liver and guiding management of orthopedic issues, MRI has an established role in the delivery of optimal care. MRI is an amazing tool that allows us to see inside our bodies and helps us get answers about a wide variety of medical conditions.  As a radiologist who spends a number of hours each day reading MRI scans, I’m often asked questions by patients and physicians about the test itself—what to expect, when is it safe, etc. These questions motivated me to expound on some aspects of this incredible but sometimes misunderstood imaging test.

The MRI machine is loud. Reality.   It’s hard to describe unless you’ve been inside one but try to imagine repetitive mechanical banging. MRI scanners typically produce noise levels of less than 100 decibels, although they have been reported as exceeding 130 decibels in certain cases. A good rule of thumb is that being in an MRI scanner occasionally subjects you to the amount of noise as a rock concert. But with some earplugs and a little background music to pass the time, it’s really not that bad.

An MRI exposes a patient to high levels of radiation. Myth. MRI uses radiofrequency pulses (not unlike those in radio waves that are already all around us) to excite hydrogen protons in the body and then measures the signal from these protons as they relax back to their native state (note to reader: I am suppressing the urge to explain this in more detail). The pulse is sent in at the resonant frequency of the hydrogen protons—that’s why they call it Magnetic Resonance Imaging. MRI does not involve ionizing radiation like x-ray or CT and so the potential risks associated with this type of radiation are avoided. MRI is thus a safe tool that can be used in people of all ages, including children. The process of exciting the protons does involve excitation of the tissues and transfer of energy, but the amounts are usually quite small.

The MRI machine can be dangerous. Reality. Remember that the MRI machine contains a large magnet, and magnetic objects placed near the MRI are potentially dangerous. There are two main concerns: magnetic objects (or more precisely, things that can become magnetic when subjected to an external magnetic field) in our bodies and those outside of our bodies. Lets take things in our body first.

When in the MRI machine, the magnet can cause magnetic objects in your body to move, or it can induce a voltage and cause them to heat up. For this reason, certain objects in your body may contraindicate an MRI (such as a pacemaker or aneurysm clip). Other objects may be relatively contraindicated. For instance, shrapnel in the leg may be okay but shrapnel lodged next to a critical structure like the aorta or spinal cord is usually not okay. Other common metal/magnetic instrumentation such as a joint replacement or most spinal hardware is usually safe (although the hardware often distorts the images…).

Then there is the whole issue of external metal objects coming too close to the scanner. Most MRI scanners have a magnet with a strength of 1.5 Tesla, which is about 30,000 times stronger than the pull we feel from Earth’s gravitational field. So when your MRI technologist says to make sure you take off your earrings or take your keys out of your pocket, it’s a good idea to listen. Metal objects literally get sucked into the center of the magnet. There are countless documented cases of metal objects—like wheelchairs, oxygen tanks, metal pellets in sand bags—hurling towards the magnet, unfortunately with some objects occasional harming or even killing patients. One important thing to keep in mind is that the magnet is always “on,” so you should never enter the MRI room carrying anything metal…

One time I had an MRI of my knee to better characterize a soccer injury, probably sustained while I was trying to break past a defender like I was still 20 years old. I kept my shoes on, not knowing that there was metal in the soles. When I lay down in the scanner, I was definitely struck by the pull of the magnet on my feet and ankles!

I can’t get an MRI because I’m pregnant. Myth. Although there are no randomized trials proving safety, it is established practice to scan pregnant patients under the right set of circumstances.   Consider the following scenario. A 28 year old woman who is 32 weeks pregnant arrives at the emergency room with nausea, vomiting, fever, and abdominal pain. The ER physician examines the patient, analyzes the history and labs, and is worried about acute appendicitis. But what test to perform? A nonpregnant patient would have a CT, but it’s obviously not ideal to expose the fetus to radiation. Ultrasound? This can be used for acute appendicitis but takes some experience and is quite difficult in the setting of pregnancy (particularly later term). A ruptured appendix is a potentially life threatening event for both Mom and fetus. How about an MRI? There is some robust literature showing the usefulness (and safety) of scanning pregnant patients for this indication. There are other scenarios for scanning pregnant patients with MRI, and many radiologists feel comfortable using this test depending on the indication, the age of the fetus, etc.

I can’t get an MRI because I’m claustrophobic. Well, this one might be myth and reality. We certainly have patients who are too claustrophobic to undergo an MRI exam. But scanners have come a long way. Gone are the days of going into a coffin-like apparatus in which you are closed in on all sides.   But you are still quite enclosed and your face is often very close to the top of the machine. If you’re worried, tell your MRI technologist (the person who actually runs the machine) that you are feeling a little nervous. They can help talk you through the exam. I have had the opportunity to work with some really great technologists and it is remarkable to see how far a few words of support go towards helping allay a patient’s fears.

MRI exams are difficult to interpret. Reality. Well of course I’m going to say that! Radiologists (and the occasional non-radiologist) train for many years (radiology residency alone is 5 years—after 4 years of medical school) learning anatomy, disease processes, and the appearance of those diseases on various modalities including MRI. But it is definitely gratifying to help give physicians and patients a concrete answer.

I hope this blog has cleared up a few points about MRI. Please not that some of the concepts discussed here were oversimplified for purposes of brevity (and so you didn’t fall asleep while reading it!). There are a lot of other discussion points that I haven’t touched upon such as the proper indications for MRI, the safe use of gadolinium contrast agent, and the expense/benefit ratio of MRI.   If you are interested in one of these topics, let me know through the Contact Us page and perhaps I can address them in a later blog. That’s all for now.

Rourke Stay, MD is a radiologist and the Founder of Lightbulb Radiology.